Winter has finally delivered some widespread snow to the region, even though most have only seen a few cms, it was enough to cause disruption. With cold temperatures hanging around, it will melt slowly over the coming days. A lot of talk has been about the snow coming to the UK on Thursday, into Friday, and warnings are in place.

Thanks again to everyone for your snow photos and traffic reports over the last week. It helps many others with valuable info.

Thursday:  A severe frost to start with ice and snow-cover. There will also be some freezing fog patches which will be slow to clear. Eventually some brightness breaking through as the breeze picks up. Cold. Max 3°C

Friday: Some early sleet or snow showers are possible from the east arriving on a bitter northeasterly breeze, leading to a sub-zero windchill. A mostly cloudy day to follow with the showers easing away. An area of heavy snow will already be affecting areas south of our region and I expect this not to reach us. Max 4°C

Sunday: Again it should be dry with bright spells and the cold weather continues. Max 5°C

Outlook: Becoming less cold, but still chilly (6-8°C), with some showers at times, which could be wintry especially when a northwesterly airflow kicks in.

Brrrr! It’s been a cold start to Wednesday (-7°C in some local spots) with a widespread frost and ice after some further hail and snow showers overnight. Today will be a lovely winter’s day, with fog slow to clear for some, but our weather is changing once again, and not just once!

Thursday: A cold start with a localised patchy frost especially in the East and the odd isolated hail or snow shower. Any brightness fading as cloud thickens from the west and it will slowly become less cold. Max 5°C 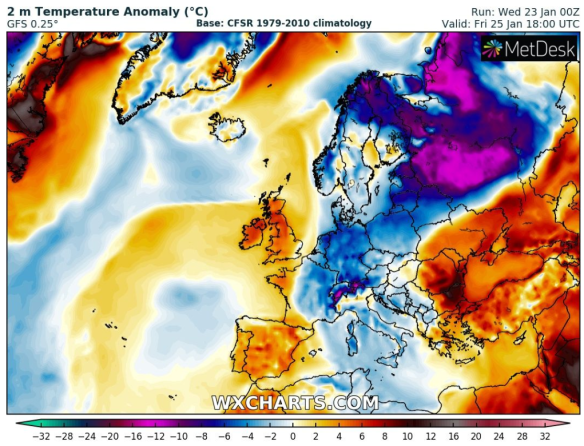 Friday: Cloudy and dull with some patchy drizzle, more so later in the day. Milder. Max 8°C

Saturday: Windy with rain spreading down from the northwest. Some sharp bursts before clearing to some showers into the afternoon. Mild at first but colder behind the main rain-band. Max 7°C 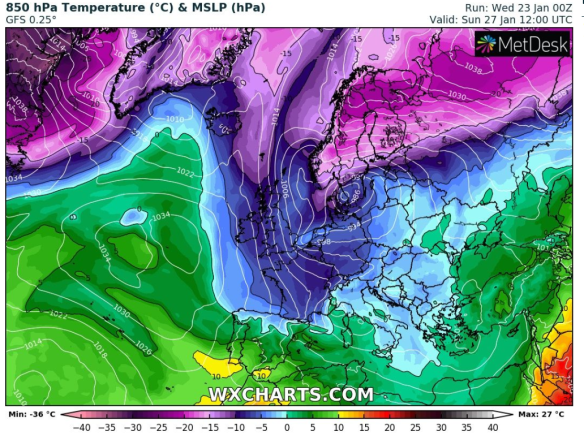 Sunday: Cold and sunny with the odd wintry shower. A raw wind making it feel well below zero. Max 4°C

Outlook: Remaining slightly colder than the late-January average, with bright spells, frosty nights but also some wintry showers around with low pressure nearby. No sign, yet, of the Beast from the East.

I wrote in my newspaper article last week, about it turning colder. This helps towards us eventually having some snow this winter, and I suggested the 19th would be the date. Well colder weather is arriving throughout today but snow-lovers could well have to live with their frustration for a bit longer.

Thursday: A frosty start with some icy patches (warning issued on Twitter). Wintry showers during the morning, mostly to the west, could merge to give some sleet or wet-snow for a time as well as hail. Away from the showers, plenty of sunshine and a cold northwesterly wind. Max 4°C

Friday: A bright start with a slight frost. Cloud will thicken from the west bringing some patchy rain which might fall as sleet or wet-snow on the hills . The precipitation will be light. Feeling raw with a steady southeasterly breeze. Max 3°C

Sunday: Hopefully less dull with a chance of some brightness. Little change in the feel of the weather. Max 4°C

Outlook: There is a lot to play for in terms of will it stay cold, then progressively turn colder, or slowly turn less cold from the west. It’s still an undecided outcome, but at this stage the next 7-10 days, leading up to month-end, it will remain cold with a lot of cloud-cover. Monday night into Tuesday could see some sleet or snow for a time but it looks to be patchy. The nights will have some frosts and daytime temperatures hovering between 4-6°C. So, nothing unusual for the second half of January, and no sign of the mega cold and snowstorms that the media portray.

Forecast Issued at 12pm on Wednesday the 16th of January 2019

It’s been a lovely winter’s day today. An icy frosty start then blue skies before some cloud arrived from the northeast. It’s bad news if you want the sun to stick around, as the last 2 days’ weather isn’t set to last.

Thursday: Cloudy, chilly and mostly dry away from the hills where the cloud could be low enough to produce some drizzle or mist. Max 6°C

Friday: Bright spells during the day as the cloud will tend to break up a little. Dry but some rain overnight. Max 8°C

Weekend: Some rain at first.

Saturday: Cloudy and a little windy at first and any rain clearing to bright spells and showers as a cold front heads through. Fresh and breezy. Max 9°C

Outlook: Some spells of unsettled weather with rain followed by showers. Milder before these bands of rain but colder and windier after them. No sign of significant cold although some of the showers later next week could be wintry on the hills.

Thanks for reading. Any comments on my blogs are welcome. I am always looking to improve them so please leave any comments below or on Twitter.

Happy New Year folks. A new year but the weather carries off where it left 2018 with little happening. That said, an SSW event is underway, which might mean colder weather in a few weeks’ time.

Thursday and Friday: We can sum up these days together. Variable amounts of cloud. Where the cloud breaks we will have sunny spells by day, but frost and some fog by night. Max 3°C

Saturday: Some patchy frost to start then any bright spells fading as the day becomes mostly overcast. Max 5°C

Outlook: Monday/Tuesday could (not all models agree) see low pressure arrive from the west bringing some rain and breezy conditions. Midweek: high pressure builds once more settling things down.

Will colder weather arrive from the East? The next 7 days will open up the time-frame needed that will give us more of an idea. Stay tuned!

Thanks to all my followers and for taking the time to read my weekly blogs.