It is looking like January is going to finish overall, as a calm, cold and dry month. Perhaps February will offer something more ‘lively’ or even snowy? Looking ahead the first week of February does indeed look windier and wetter but no sign of snow. As always, time will tell.

A wetter and windier theme as we enter February?

Thursday: We drag in some of the very cold air that has been stationed across Europe, so it will feel bitter. Mostly cloudy and we can’t rule out the odd snow flurry. Some brightness here and there especially later. A harsh southeasterly wind leading to a significant wind-chill. Plenty of layers needed. It could be the coldest day for up to 2 years. Max 1°C

Friday: A cold start but becoming slightly milder later and nowhere near as cold as yesterday. Remaining breezy so it will feel chilly in that wind. Mostly dry and cloudy with limited bright spells. Max 5°C

Saturday: Likely to see some rain in the form of showers at some point, especially into the afternoon . Winds a little lighter. Max 7°C

Sunday: The best day of the weekend. Sunny spells and with light winds it shouldn’t feel too bad. Dry. Max 7°C 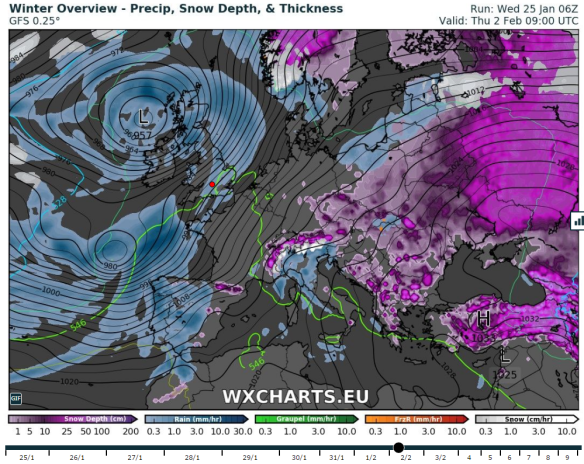 Looking ahead: There is a reasonable chance that the Jet Stream will kick into gear into February so expect wind and rain. As always, keep up to date on Twitter by following @ChadWeather.

This is one of the most benign forecasts I’ve ever written in my blog. The weather is stuck in a rut and the last few days have been depressing. Drizzle, mizzle, fog, low-cloud and darkness. Horrible.

To top things off, as you know I’m a cold- and snow-lover, even Spain has been seeing snow today. 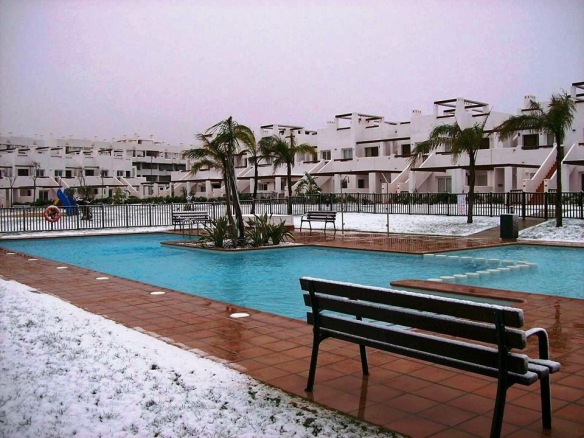 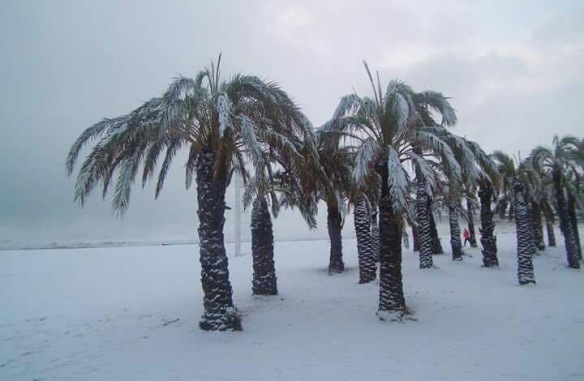 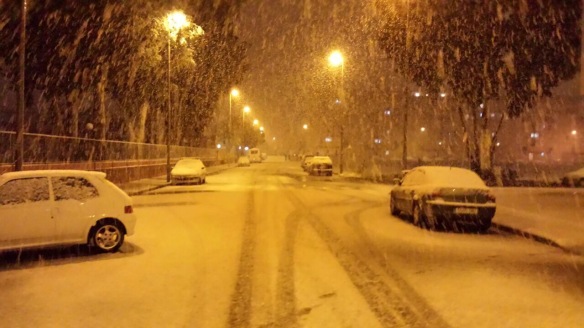 Most of Europe has been cold and snowy and this cold air has extended to most countries bar the U.K. (the SE being an exception for once). 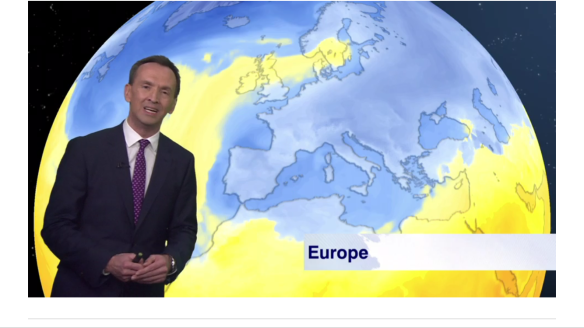 This graphic from the BBC shows exactly where the cold has spread to across Europe.

So, are we into for a share of this widespread cold. Well we will all become a little colder towards the weekend but we won’t get any snow or anything resembling very cold conditions.

We have high pressure in charge of our weather but for us it’s a ‘cloudy high’, which means we’ve dragged in a lot of cloud from the west which is ‘trapped’ and can’t escape. With the sun weak at this time of the year, there’s no strength in it to even attempt to burn off the cloud. This leads to a bland outlook.

Oh, one thing this weather has done, is broken one of my records. The difference between the Max and Min temperatures during a day, is called the diurnal temperature variation. My previous record was 0.9°C in January 2013. This was beaten on Tuesday 17th January 2017 with the range being just 0.8°C thanks to the lack of sun and damp/dull/misty conditions.

Saturday and Sunday: An easterly airflow will drag in some slightly colder air so noticeably chilly across the region. There should be enough cloud-cover to limit any frost. Mostly cloudy during the day but a chance of some brightness especially on Sunday. Max 4°C

Looking ahead: Settled early next week before things look to turn unsettled from the west with rain and milder temperatures. Wanting snow and some ‘proper cold’…..then forget it until February.

Keep up to date with my local forecasts on Twitter by following @ChadWeather.

Images: From Twitter and credited above and BBC Weather

Headline: Colder with snow for some of us.

Thursday: A very cold northwesterly wind in place which will bring some rain, hail, sleet & snow showers. Some of the snow will settle leading to tricky driving conditions with some ice later but this is expected to be in areas that are above 225M. You can reference the local elevation map or use the link to see what height you are above sea level. Max 3°C but feeling sub-zero in the wind.

A bitter Thursday with rain, hail, sleet and snow showers in the mix. Snow settled above 200-250M

Use this link to see exactly how many metres you are above sea level, http://www.altitude.nu/ or for local locations see the image below.

Local locations with their height above sea level

Friday: Windy again with a brisk northerly airflow. Some more wintry showers around but they should be less frequent than what we saw on Thursday. Sunny spells in between the showers. Feeling very cold. Sharp frost overnight. Max 3°C

Saturday: Apart from the odd wintry shower, it looks mostly dry with sunny spells and a cold northerly or northwesterly breeze after a frosty start. It will turn frosty again later in the evening but it is likely to cloud over by morning.  Max 3°C 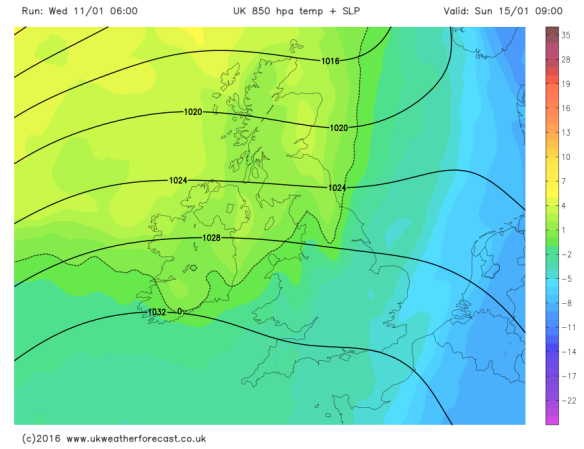 Milder air comes in from the NW during Sunday recovering temperatures

Sunday: There is still uncertainty about today but it seems that rain will topple in from the northwest which might, initially, fall as sleet or wet-snow on the higher routes. This weather front will also bring milder temperatures.  Max 6°C

Looking ahead: Mild initially but turning slowly colder from midweek with a chance of a cold easterly feed being established.

The media have been at it again with their annual, or is it now weekly, lies about a Killer Freeze on the way with record low temperatures and more snow than we’ve ever seen before.

Unfortunately some folk, especially the vulnerable still believe this tripe, so spread the word, never believe their headlines. I’ll be the first to let you know, if we are due any snow and plummeting temperatures.

Thursday: A very cold and frosty start with temperatures of -4°C in some parts. A lovely, crisp winter’s day follows with plenty of sunshine. Make the most of it as all change ahead. Max 3°C

Friday: Cloudy with rain coming in slowly from the west. Some of the rain will be heavy. A cold-feeling day but temperatures on the rise. Max 8°C

Not much sunshine at the weekend but not a washout.

Saturday: A mild start with some fog and low-cloud over the hills. The latter could persist all day. Hopefully, most of us will get away with a cloudy and dry day but don’t be surprised to see some drizzle, especially on the hills. Max 8°C

Sunday: Little change. Cloudy, again there could be some low-cloud and drizzle towards hillier areas. No frost as temperatures on the milder side. Max 10°C 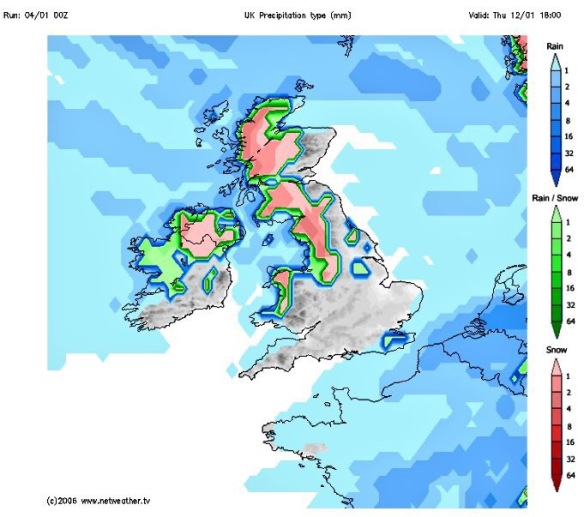 Looking ahead and the following week does see slightly cooler or colder air return with showers, which might be wintry with snow on the hills. Now where’s that Killer Freeze? 🙂

Thanks for all your support on Twitter and with the blog in 2016. Here’s to an eventful weather year in 2017.